Curious about what we had for Halloween?  Well then this post's for you!

Puking Pumpkin Veggie Tray (by my sister):  A small jack-o-lantern with raw veggies, some Hawaiian Bread and some store bought dip. :) 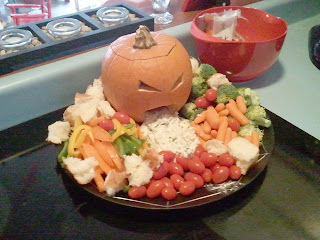 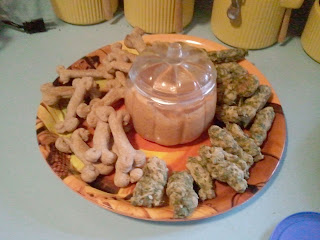 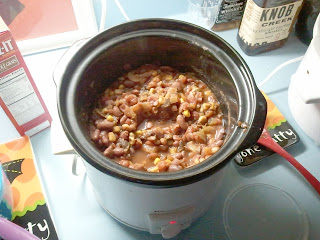 MEAT CHILI: browned beef, chopped onion, 1 can diced tomatoes with chili (mild), 1 can tomato sauce, 1 can diced tomatoes, chili powder and a bit of veggie broth.  I cooked the beef and onion the night before and put them in the fridge so that in the morning I could just dump it all in and cook it in the crock pot on low for the day. 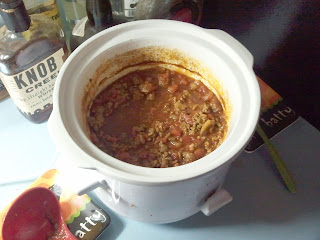 Once everyone had eaten (at least a first go round) we headed out for some trick or treating.

The final costume choice was a Witch... 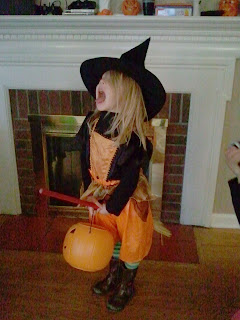 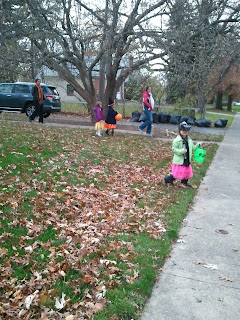 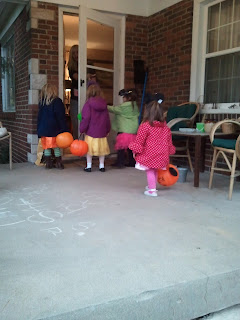 After trick or treating we headed back to the house for a bit of warming up.  The girls got to eat a piece or two of their candy, I had a second bowl of Veggie Chili, and then we wrapped everything up for the night.

Now we're just waiting for the Candy Fairy (also known as the Switch Witch) who is willing to exchange all Kai's trick-or-treats for a new toy or outfit.  The candy will then be donated to either the teacher's lounge (I have it on good authority that they'd appreciate it) or to the Hub's office.
Posted by Emily at 11:36 AM