Wow, I happened to check the "stats" on my blog this evening and you guys made my "Have a Super Day" Super Bowl Festivities post the most popular one so far!  I guess you're experiencing all the fun vicariously through me... or maybe you're just questioning my hat choice?  It's my pink Colt's Hat (there's a pink horseshoe on it).  It seemed like a good decision at first but it turns out that the loose knit lets a lot of air in.  When the wind blew I definitely felt it.

Sadly I did not do anything overly fun exciting on Monday.  The Hub's car is still acting funny so it spent the night at Pepboys in an attempt to get it to act funny there.  Since his car was out he  had my car and I was stuck at home.  BUT the weather's been amazing (yes, the day after we walked in the bitter cold we got a warm front) so I deweeded some of the flower beds.  That's right people, I'm about 4 months ahead of schedule.  I'm pretty sure that's some sort of a record!!

Breakfast was not photographed but I'm 99% certain it was oatmeal.  I find something I like and I stick with it. :)

Lunch was a Hummus, Sprouts and Sunflower Seed Sandwich (Kai had her standard Jelly) on Whole Grain Bread with a side of Veggies & half a Blood Orange. 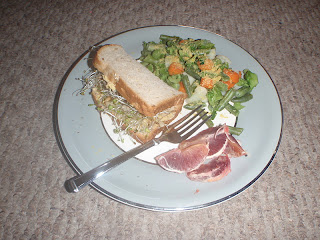 I could very easily eat Hummus all day, every day.  It's kinda like pizza or a sandwich.  There are so many different ways to "dress it" that it's not like you're really eating the same thing over and over again.


This Hummus was on the savory side:
1 can Chickpeas - drained & rinsed
Lime Juice - 1 Ice Lime Cube
Tahini Sauce - Big spoonful (to taste)
A LOT of dried Basil
and Olive Oil
Blended together until smooth.


Dinner was kinda-sorta left overs.  There were 6 shells left from the Taco shell box and about half the meat (1/4 lb) from the previous taco night.  Then it was just a matter of chopping up more veggies, heating up some corn and black beans and making up our plates. 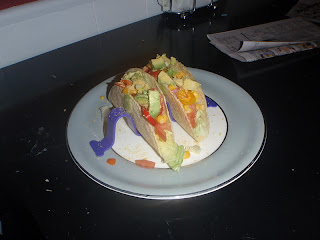 And she actually ate them both!  The girl was hungry!

I had 1 taco...Surrounded by a "taco" salad.  Hey, when the shell's not enough, just throw the fillings on the plate and call it a salad, right?  Right. 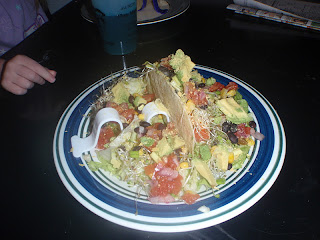 The Hubs looked at my plate and laughed at me.  His comment was along the lines of "that's creative".  I'm going to take that as a complement. :)

The Hub's tacos reminded me of the ones you'd find at Taco Bell.  Meet, Lettuce and Cheese.  But hey, it makes him happy. 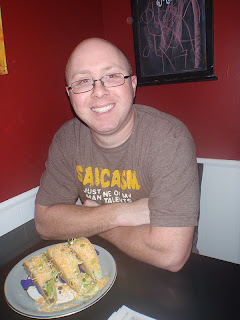 And how else would I end my meal but with a Cinnamon Apple Banana Soft Serve (exactly what it sounds like - frozen apple, frozen banana & Cinnamon blended until smooth). 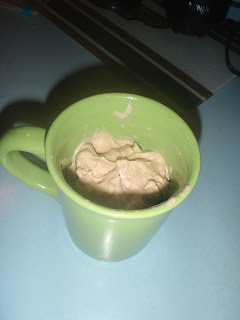 Then I put my "ice cream" in a mug so a certain little girl wouldn't know what I was eating and steal it from me.  lol!

Have a Super Day!

I must have heard "Have a Super Day" about 100 times on Sunday!  If you don't know by now, Indy is hosting the Super Bowl this year so the city's going all out.   As locals we wanted to get in on the fun before all the Bowl Fans showed up from around the country.  So yesterday we put on all the warm clothes we could muster and headed out.

We parked at the Indy Zoo (where we have memberships) and then walked over the canal.  This has got to be one of the most beautiful walks in town.  If you're ever in Indy you should definitely go on a canal walk! There are sculptures and views that just can't be matched!


As we walked toward the center of town the Super Bowl frenzy started to ramp up.


First stop was the Circle...

Then we headed over to Georgia Street where The Super Bowl Village is...


When Kai started to cry because her fingers were cold and hurt we knew it was time to visit The Huddle for some Hot Cocoa!


Then we headed back out to see what else was around... 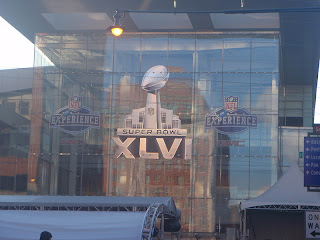 After leaving the "Experience" we decided to find a place to eat...

Finally we headed back to the car.

And that was our day.  There was so much more to do but we ran out of time.  As it was Kai got to bed about an hour past bed time!  If parking was more convenient/cheaper I'd probably go back every evening. :)