Orange-Lime-Ade, the perfect end to the day!

Wow, was this a filling breakfast.  It actually surprised me how full I was!  When I saw Snack Girl's Pumpkin Custard I thought, "That's easy enough to make for breakfast!".  And so that's exactly what I did. :)

I made a double batch (2 servings, one for me and one for Kai)

That meant 1 Cup of Pumpkin, 2 eggs, spices and then I used Maple Syrup for my sweetener. 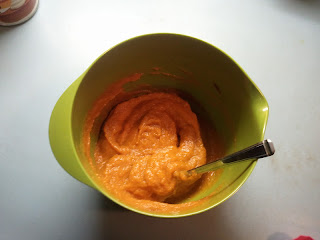 And then, since I don't have large ramikins, and EVERYONE loves hearts, I poured it evenly into 7 silicone hearts. 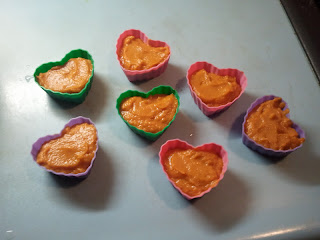 Which I microwaved for 4-5 minutes until the top was set. 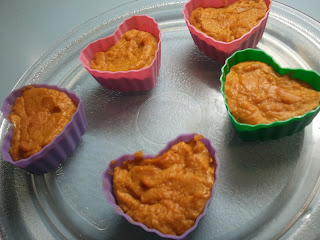 And then started topping!!

On mine went Coconut Whip (which melted off the hot custard), raisins, pumpkin seeds and some of the crystallized ginger I had from the auction basket. 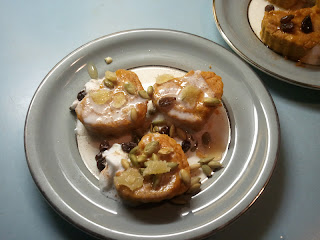 On Kai's went raisins and a drizzle of Agave Nectar with a side of coconut whip in case she wanted to try it...she didn't. lol! 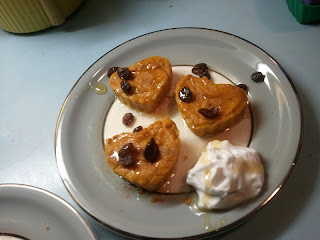 They really were delicious!!  I think they're going to become a staple in our morning breakfast routine.  Quick, Tasty and Filling is pretty hard to beat!!

For lunch Kai wanted Mac & Cheese (when doesn't she want mac & cheese?).  We had planned to eat Chili for dinner so making a batch of Macaroni actually made a lot of sense.  Step one...Boil some Macaroni!  We buy Barilla Plus Elbows. 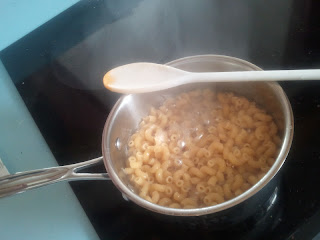 After it was cooked up to Al Dente I drained it and put about 1/2 in a bowl.  The rest I let cool and then put in the fridge to mix into the chili.

Into the pasta I mixed some Nutritional Yeast, maybe 1/4 Cup, and some Almond Milk, maybe 2 T.  It wasn't a true Mac and Cheese but Kai LOVED it, and so did I.  I don't have anything truly against cheese but I was thinking that she may want mac and cheese for dinner, which often happens when I make us chili so I thought she could have the real stuff for dinner. :) 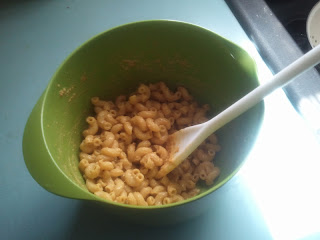 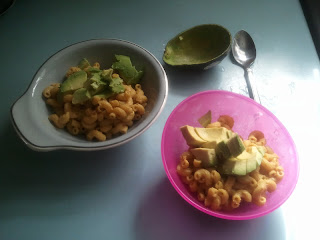 And enjoyed a side of Kale Chips. 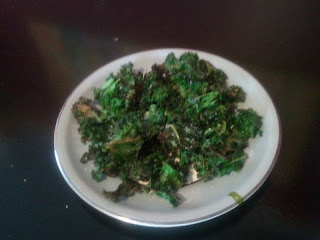 And then came dinner...

I was a seriously busy girl yesterday.  Every time I completely one project I'd get 2 new e-mails in its place. Suddenly it was 5:00 (we try to eat between 5:30 and 6) and I hadn't started dinner!  Yikes!!  So much for my Chili!  I didn't have any Kidney Beans pre-made so cooking up chili in 30 minutes didn't seem feasible.

Frozen meal to the rescue.  I had 2 bags of left over Gumbo from Mardi Gras in the freezer so I threw one in a dish and nuked it until it was good and warm.  Then I put a bag of 90 Second rice in and heated that up. 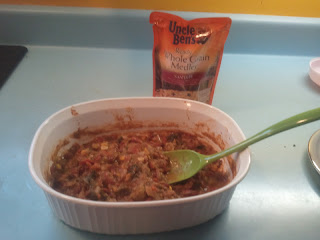 I layered it onto my plate... 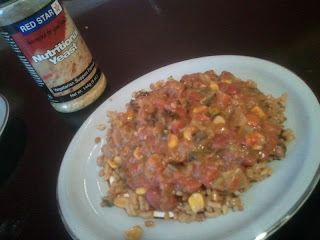 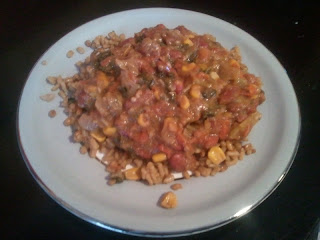 I'm not saying I ate everything on my plate (which I did).  I'm saying I ate the entire batch of Gumbo!!  It was so good, dare I say better than chili?  Yes, I think I would.

Kai wasn't into it so she had a jelly sandwich and a BIG bowl of apple sauce with cinnamon, flax seeds and raisins stirred in.

The Hubs actually did have Chili.  It was a simple matter of browning some meat, sauteing an onion, and adding 1 can of diced tomatoes with chili, 1 can of tomato sauce, chili powder and garlic powder.  It sat and simmered until about 6:00 and then the Hubs got to enjoy it with the pre-made macaroni, some cheese and oyster crackers. :)

After dinner I had the lazy girls dessert... 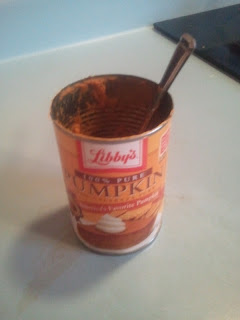 Yup, I didn't even put it in a bowl.  I added a splash of almond milk to the left over pumpkin from breakfast and then threw in a few raisins.  MMMMMM, I LOVE Pumpkin!

Later I did my 30 minutes of yoga and then got it in my head that I wanted lemonade.  So into my Ninja went 2 Lime Cubes (lime juice frozen in ice cube trays over the summer), 1 Blood Orange and a packet of Truvia. 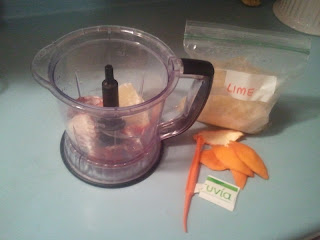 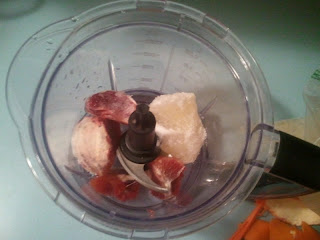 Then I blended it until smooth.  It was PERFECT!  Exactly what I wanted.  :) 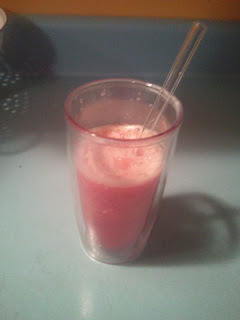 If you don't like pulp then you'll have to strain it but I do, so I was happy with it as is!

I used to buy powdered lemonade mix but no more!  Frozen Lemon or Lime, water and sweetener is all you need and it tastes SO MUCH BETTER than the powdered stuff.